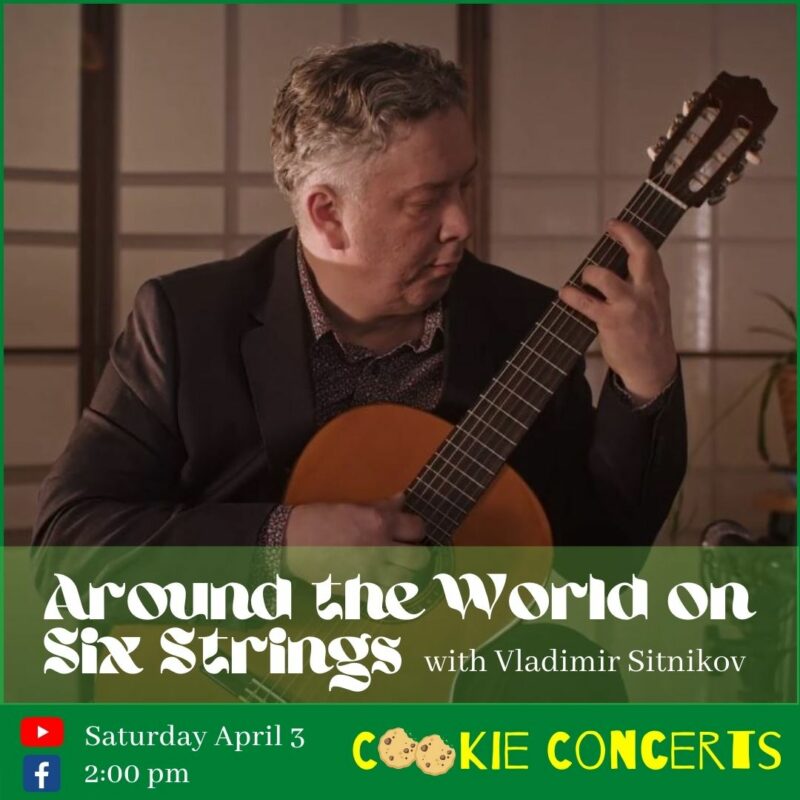 MUSIQUE ROYALE presents AROUND THE WORLD ON SIX STRINGS

On April 3 at 2 pm join Musique Royale virtually for “Around the World on Six Strings”, as Vladimir Sitnikov plays music from different countries, genres and cultures on his guitar. Young musicians Emma Poulsen (singer) and Mia Goedkoop (guitar) are also featured in this program.

Before Vladimir Sitnikov made Canada his new home, he studied guitar and composition in Russia. A prize winner of an international classical guitar competition, he graduated from Rostov State Conservatory and toured across Europe with the Bis Band, as well as a solo player.

Vladimir continued his musical career in Canada, performing with such bands as Maderaz, Lady Son, Bossanova and many more at venues and festivals all across Canada, including Roy Thomson Hall in Toronto and Maritime Museum and Dalhousie University in Halifax, writing songs and arrangements. He appeared on award winning records such as Reflection’s “Stress Less” and Lady Son’s “Semillas”, TV and radio stations including CBC. Recently, Vladimir has formed the Summer Trio along with drummer Scott Ferguson and bass player Larry Bjornson performing concerts of Latin jazz and Flamenca rumba around the Maritimes.

He has also devoted time to sharing his music through education, and has been teaching music at Talent Studio, Kingsview Academy and SCANS in Halifax and Ontario Conservatory in Toronto. With Maderaz Latin Music Vladimir performed around 100 educational shows per year in schools across Ontario as a part of Prologue To The Performing Arts for ten years, collaborating with such children performers as Lois, Sharon and Bram, Jack Grunsky, Eric Nagler, Balet Creole. Currently, Vladimir is the musical director of The Shining Lights Choir – a community choir for homeless and disabled people as well as the host of weekly classical music program From Bach To Beatles on CIOE 97.5 FM radio station, both in Halifax, NS.