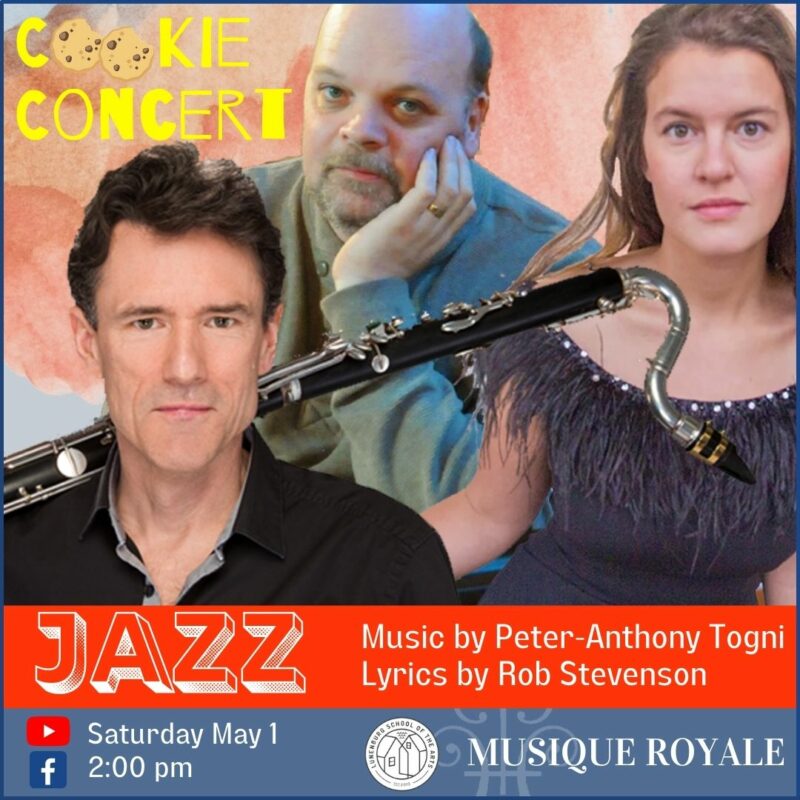 After a long day writing commissions for some of the most esteemed chamber choirs across Canada, Peter-Anthony Togni relaxes at the piano and creates music for the many sets of lyrics Rob Stevenson has sent him.  The special artistic alliance between composer (Togni) and lyricist (Stevenson) began several years ago over a number of parties at Jeff Reilly’s house, where Stevenson mentioned to Togni that he was writing lyrics and the composer agreed to write some music to these snippets of verse.   Stevenson began sending the lyrics to Togni, and the pair have written over 60 songs.

Togni and Stevenson shared their music with soprano Janelle Lucyk, who lights up these jazz and country-esque songs which are infused with maritime references and themes of “nostalgia,” “the gamble,”, and “loyalty.” Think Monica Zetterlund with Bill Evans, or Blossom Dearie, but then add Erik Satie’s mood, and a dose of Patsy Cline and now you have the kind of alchemy from which this creative project bloomed. Janelle and Peter are joined by bass-clarinetist Jeff Reilly whose pure emotional accessibility as a performer, combined with avant-garde sonorities and daring improvisations completes the trio.

This virtual cookie concert will be released on Saturday, May 1 at 2 pm for free on Musique Royale’s YouTube and Facebook channels. In order to comply with recent COVID-19 protocols, the Cookie Concert was recorded at St David’s Presbyterian Church in Halifax.

Cookie Concerts are child-friendly concerts normally held the first Saturday of the month at 2 pm (from Oct-June) at the Lunenburg School of the Arts. During COVID-19 Musique Royale pre records and offers Cookie Concerts online for free via it’s YouTube and Facebook channels.

Ontario born, Nova Scotian since the mid-70s, Rob Stevenson is 72 years old. He played drums in a high school rock band as a teenager, but has done nothing in music since. He has been a furniture designer/builder most of his life, in the midst of which he worked for 18 years as a furniture and wooden objects conservator with Parks Canada.

Having written no songs before the age of 69, has now cranked out over 70 of them in the last couple years. He wishes he’d done this 40 years ago, but suspects he had nothing to say back then.  His wife reminds him from time to time of former Canadian Prime Minister Lester B. Pearson’s wife Maryon, who said “Behind every successful man, there stands a surprised woman.” Rob hopes to surprise his wife for many years to come.

Peter-Anthony’s music is spiritually rooted and contemplative, ranging from the ethereally quiet to the explosive outer limits of contemplation. One of Canada’s busiest contemporary composers, Juno nominated Togni has toured internationally and his music is regularly broadcast worldwide. Togni’s works have been released on XXI Records, CBC Records, Hänssler Classics, Warner Classics UK and ECM.  He is also a well-known Canadian broadcaster. Recent recordings include Lamentatio Jeremiah Prophetae, (bass clarinettist Jeff Reilly and the Elmer Iseler Singers – 2010), Spatium (Togni Trio – 2012), Piano Alone (solo piano – 2013), Estuary (Santuary Trio – 2015, ECMA nomination 2016) and Sea Dreams (Luminous Voices – 2020). Responsio (premiered 2013) won the 2014 Lieutenant Governor of Nova Scotia Masterworks Arts Award, was released on ATMA classique (2015) and was nominated for a Juno Award (2016). Warrior Songs, for percussionist Jerry Granelli and choir, premiered in Boulder Colorado (2014), with its Canadian premiere in Toronto (2015). Peter-Anthony played at the 53rd Magadino International Organ Festival (Switzerland – 2015), co-founded by his father the late Victor Togni. Isis and Osiris, Gods of Egypt, a new Canadian opera, premiered during Opera in Concert’s 2016 season. Sea Dreams, for choir and two flutes, premiered in Calgary in 2018, and Living Flame of Love premiered in Edmonton in 2019.  Originally from Pembroke, Ontario, he currently resides in Dartmouth, Nova Scotia, where he composes and teaches at Acadia University, and is organist and choirmaster at St. Benedict Parish.

Janelle Lucyk (soprano/violin) graduated in 2014 with distinction from the Conservatoire Royal de Bruxelles in Belgium where she debuted Lux Aeterna, written for her and the Brussels Chamber Choir by Jan Moeyaert, performed as a soloist and recorded with Musica Fura (Praetorius Christmas Mass) and Laudantes Consort (Palestrina), and formed Voces Desuper, an ensemble performing regularly in the magnificent Cathédrale de Saints-Michel-et-Gudule, and especially at the Te Deum ceremony for the King and Queen of Belgium. Following, she completed her Masters in Management at Durham University in the UK and won the role of Susanna in Durham Opera Ensemble’s The Marriage of Figaro for which she was awarded the Best Soloist by Music Durham, and Best Female Soloist by her peers at the DOE.

Growing up as a violinist, Janelle was the youngest member of Regina Symphony Orchestra and with them performed Vivaldi’s Four Seasons as soloist in 2009.   Janelle has been captivated by Nova Scotia’s flourishing music scene since arriving in the stunning maritime province. She has had the good fortune of working as a soloist with the Kings College Chapel Choir under five-time Grammy winner Paul Halley on many unforgettable concerts including Monteverdi’s Vespers of 1610, Selva Morale e Spirituale and multiple Bach Passions.  She performed as a soloist with Per Sonatori, Boar’s Head Festival, Newfoundland Symphony Orchestra, Scott MacMillan’s Celtic Mass for the Sea (Canada 150), Aureas Voces, Daniel Taylor’s Theatre of Early Music, Ensemble Caprice & Constantinople and has organized concerts involving improvisation, early music, and jazz with Sarah E. Myatt (mezzo), composer/organist Peter-Anthony Togni, and Jeff Reilly (bass-clarinet). Janelle is the Artistic and Administrative Director of Musique Royale (est. 1985).

Jeff Reilly leads a multifaceted life as a bass clarinetist, composer, conductor, a CBC radio music producer, and as a radio documentary maker. A recording artist for the prestigious German label ECM, he has performed with choirs, orchestras and chamber groups, in music festivals, cathedrals and concert halls around the world – with his trio Sanctuary he has performed in Shanghai, Paris, London, New York, St Petersburg, Moscow, Riga, Sochi, Toronto, Montreal and more.

The pure emotional accessibility of his rich, lyrical performance and compositional style reminds us that extended techniques, avant-garde sonorities and complex forms of notation can be executed within the service of musicality and sensitivity. Receiving 4 Juno nominations, an ECMA award as well as 4 ECMA nominations, his approach to music blurs any simple distinctions between improvisation and composition, and does so with a musicality and sensitivity that reminds us that such distinctions are moot. Jeff has commissioned many large-scale works that feature bass clarinet, including Eriks Esenvalds, Christos Hatzis, David Mott, Peter-Anthony Togni, and Barry Guy.

Spanning 20 years, the wide ranging performance experience of Peter-Anthony Togni and Jeff Reilly in their duo, Blackwood, includes hundreds of concerts touring Russia, China, Europe and North America performing in a range of contexts:  jazz, contemporary classical, choral, orchestral, string orchestra, and Gamelan orchestra. The glue that holds them together is a common love of improvisation, a passion for taking musical risks, and a deep desire to to connect with their audience.