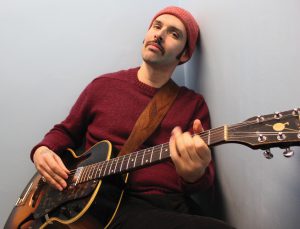 Currently calling Lunenburg, N.S. home, Garrett Mason has been on the music scene for some 20 years and he is only 36 years old!

Garrett is typically linked to the blues but his style surpasses any genre, notes of country and rock compliment what is truly a unique and original sound. His technique is self-taught but that is not to say that he did not have many a great mentor along the way.

“It’s a pleasure for our Lunenburg School of the Arts to present Garrett Mason in his first live solo concert in Lunenburg,” says LSA’s volunteer chair, the Honourable Wilfred P. Moore. “It promises to be a great evening with this very talented JUNO award winning artist.”

Mr. Mason certainly takes his music more serious than he does himself. His guitar ‘licks’ are fascinating and packed with personality, his lyrics can switch from shallow to deep with each changing tune. What we can expect from Garrett is not often predictable but you can usually find him playing a sold-out show, dance-worthy guitar rhythms with a pleasant analog sound, and non-stop entertainment.

Some notable facts about the Truro raised boy; He has put out 2 albums 1 of which was Juno award winning, but that was 10 years ago. He never went away though, solely playing live music nearly 3 days a week, including every Tuesday night at Bearly’s House of Blues in Halifax. He has been mucking around in the studio again recently, which means we can expect some new tunes soon!

His father, Bluesman, Dutch Mason, of Lunenburg decent, would be the propelling force behind his musical career from the young age of 17.

All proceeds from this concert go to the Lunenburg School of the Arts Bursary Fund.