Lecture Series: A Visit to the Würzburg Residence

A Visit to the Würzburg Residence

The Würzburg Residence is a Baroque palace located in Southern Germany, along the Main River in Lower Franconia – a region well known for its local wines and Baroque architecture. 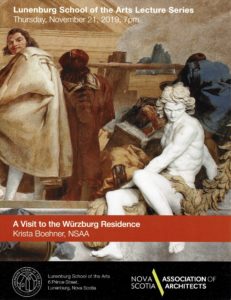 Led by architect Balthasar Neumann, the Würzburg Residence was built and decorated by an international corps of architects and craftspeople. Through the process of building the palace, ‘Würzburg Rococo’ was created, a unique and exuberant form of the Rococo style.

In March 1945, disaster struck when the medieval city of Würzburg was bombed by the Allies.

In 1981, the Würzburg Residence was declared a UNESCO World Heritage Site. UNESCO states, “Perhaps no other monument from the same period can claim such a concurrence of talent”. (1)

Krista Boehner was born in Halifax, Nova Scotia and raised in Dartmouth and Bedford, Nova Scotia. After graduating high school, she won a bronze medal for Nova Scotia in the 1991 Canada Games in the sport of biathlon. Krista went on to live and train in Canmore, Alberta and competed for Canada in Biathlon World Cups. Afterwards, she attended Dalhousie University in Halifax, Nova Scotia and graduated with a Master of Architecture (First-Professional) in 2001. As part of her co-operative degree program, Krista worked as an intern architect in Yellowknife, Northwest Territories. Back in Halifax, she worked as an intern architect on healthcare renovation projects. In 2009, after her internship, Krista became a licensed member of the Nova Scotia Association of Architects. In 2010, she began KMW Architecture, a rural architecture practice based in Martins River, Nova Scotia, on Nova Scotia’s South Shore. Krista’s current interests in architecture include accessibility and passive solar design.

The Lunenburg School of the Arts lecture and film series, in association with the Nova Scotia Association of Architects – South Shore Chapter, takes place the third Thursday of the month, September – June (some exceptions). Learn more about the NSAA here