Saturday, January 4 at 2:00 p.m. at the Lunenburg School of the Arts 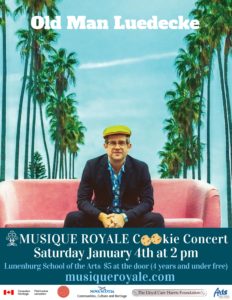 Musique Royale Cookie Concerts invite you to ring in the New Year with Old Man Luedecke!  Bringing his songs and a banjo, Old Man Luedecke is the real thing, a modern-day people’s poet and traveling bard and balladeer. He’s played around the world to a loving and increasing fan base, and won two Juno awards in the process. With skillful precision and a storyteller’s heart, Luedecke’s narrative-driven folk songs are playful, coy, and soul warming.  His songs are about human connection, and the concert will showcase both his songs and his many witty ideas.

Old Man Luedecke is the recording name of two-time Juno Award-winning Canadian singer-songwriter and banjo player Chris Luedecke of Chester, Nova Scotia. His 2008 album, Proof of Love, won a 2009 Juno Award for traditional folk album of the year. In 2011, Luedecke won the same award for My Hands are on Fire and Other Love Songs. In 2012 Tender is the Night was released and picked up a Juno nomination as well as “Folk Album of the Year” from Music Nova Scotia.  His new album “Easy Money” was released in June 2019 and be warned, it’s incredibly catchy.  Musique Royale is delighted to showcase Old Man Luedecke on the South Shore on January 4th!