Saturday, November 2 at 2 p.m. at the Lunenburg School of the Arts 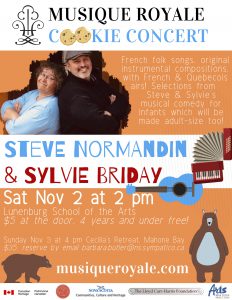 Musique Royale Cookie Concerts invite you to come hear a happy programs full of French folk songs, original instrumental compositions, and French & Quebecois airs! With selections from Steve & Sylvie’s musical comedy for infants which will be made adult-size too! Steve and Sylvie have many musical talents you’ll hear including singing, piano, accordion, harmonica, guitar, spoons and foot tapping!

French-born in Lyons, Sylvie Briday learned jazz saxophone at an early age. Bewitched by Cuban music, she travelled to the legendary island to learn percussion and arrangements studying alongside Buena Vista Social Club member Eliades Ochoa. Director of her own salsa groupe, Sonero, the group toured around France for fifteen years. From 1993, Briday has taught music in elementary schools of Pink Granite Coast area, in Britanny. As a composer, she has created mini-operas, musical comedies (a huge success was “Leon, the groundhog”) and latin songs, all for kids. In 2008, Briday visited Quebec and fell in love with the joy and the rhythm of French-Canadian folk music. Now she can teach spoon, foot-tapping and square dances to French people, which she enjoys tremendously! With Steve Normandin, she created a new half-hour show and a CD for small kids (from 0 to 6) Kourouk & Mashka, two baby bears who become friends… but fight for a bee house full of honey!

A self-taught accordionist and pianist, Steve Normandin won the public’s award and the stage performance award at Petite-Vallée’s 2001 Festival en chanson. From 2004 to 2008, he worked as an actor, musician and arranger for a show called « The Busker’s Opera », directed by Robert Lepage. In 2014, Suzie LeBlanc requested Normandin play and sing on her Christmas recording « La veillée de Noël de France à l’Acadie ». In 2015 he sang, made arrangements and played accordions and harmonicas for a tribute to La Bolduc, Québec’s first woman songwriter, with the Trois-Rivières Symphony Orchestra, conducted by Jacques Lacombe.

His encyclopedic knowledge of French songwriting of all times and styles has brought him to perform in many different parts of the French-speaking world (France, Belgium, Switzerland, Québec, New Brunswick). Steve Normandin is often invited on French CBC, as a song and history specialist, for a radio show called Aujourd’hui l’histoire. Since 2015, he lives on the lovely western part of France called Brittany, next to the sea…

Cookie Concerts are hour long presentations incorporating music with other artistic creativity, for the whole family to enjoy! Come out the first Saturday of each month from October-June for music and cookies, always 2 pm at the Lunenburg School of the Arts. $5 at the door (4 years and under free). musiqueroyale.com