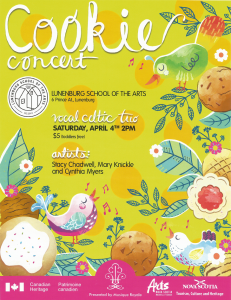 The next Musique Royale ‘cookie concert’ at the Lunenburg School of the Arts features a new Celtic trio. So new they are still looking for a name. Stacy Chadwell, Mary Knickle and Cynthia Myers will entertain you with their funny songs that pack a celtic punch, all in three part harmony. Included are children’s favourites as well as audience participation.

The event will take place at the Lunenburg School of the Arts, 6 Prince Street (corner Montague and Prince), on Saturday, April 4 at 2 pm. Admission to the performance is $5 at the door (free for toddlers). Admission also includes a time to socialize with artists and friends as you enjoy the unique atmosphere in one of Lunenburg’s newest artistic spaces…. and a freshly baked cookie! Advance reservations can also be made by calling the Musique Royale Box Office at 902-634-9994.

About the musicians:
Stacy Chadwell, a Nova Scotia newbie, is a vocalist and pianist originally from St. Louis, Missouri. She brings her classical training to each performance, with a background in opera fueling a love for foreign, cultured music. From the Bal-musette of France – to Portugal’s Fado – to Norse minimalism – this wide variety of genres combine for a stunning repertoire sure to delight.

Mary Knickle (Singer, actor, composer) has performed on stage in folk venues, theatres and folk festivals across Canada. Recently she has found a new passion in composing large works. Her opera Morgan Le Fay received a rave review in Opera Canada Magasine, and her Seafarers’ Requiem received national coverage on CBC radio. She is currently working on a new Opera and several choral works.

Cynthia Myers (Vocalist/Actor/Writer) has performed as a musical theatre actress on stages and in clubs with various jazz combos in both Canada and the U.S. Cynthia is a five time veteran of the fringe festival having worked both in the Victoria and the Seattle festivals. When not on stage with Swingology, the Cynthetics or Jazzette, Cynthia is writing musicals for children, and developing curriculum for the Chester Playhouse After School Program. She has been an educator for the past 20 years.