Cookie Concert
Saturday, February 7 at 2pm
$5 (free for kids under 6) 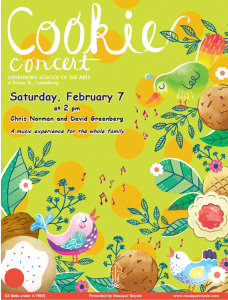 Chris Norman and David Greenberg, two of the most imaginative performers in traditional and early music, are guest artists at the first ‘Cookie Concert’ in Musique Royale’s 30th anniversary season. The event will take place at the Lunenburg School of the Arts, 6 Prince Street (corner Montague and Prince), on Saturday, February 7 at 2 pm. Admission to the performance is $5 at the door (free for toddlers). Admission also includes a time to socialize with artists and friends as you enjoy the unique atmosphere in one of Lunenburg’s newest artistic spaces… and a freshly baked cookie! Advance reservations can also be made by calling the Musique Royale Box Office at 902-634-9994.

Cookie concerts – combining originality, fun and engaging musical and artistic presentations – are designed for the whole family to enjoy. Well known to Nova Scotia audiences Chris Norman and David Greenberg have garnered respect from audiences, presenters, and colleagues alike in North America, Europe and Asia. Their performance is sure to delight all ages, whether 2 or 92!

Biographies of the artists 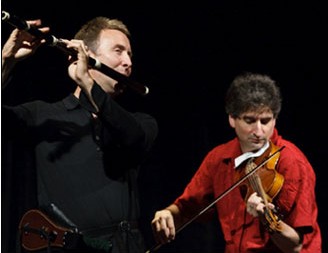 Chris Norman has done much to bring the simple wooden flute to the forefront as an alternative voice to the modern orchestral instrument and redefined the flute in traditional Canadian & Scottish traditional music. His busy performing schedule includes solo engagements and concerts with a variety of ensembles, appearing frequently as soloist with orchestra and touring with his own Chris Norman Ensemble. In years past Chris has also appeared worldwide as a member of the international folk trio, Helicon, the all-star Celtic fusion group, Skyedance, the acclaimed early music group, The Baltimore Consort and across Europe with Concerto Caledonia. Norman’s flute playing can be heard featured on the Oscar winning soundtrack of Titanic and other Hollywood films including, Soldier, and the Stone of Destiny. His solo CD releases have received unanimous praise from critics and audiences alike and appeared on Billboard’s crossover charts. Chris is the founder & director of the Boxwood Festivals & Workshops.

David Greenberg is known primarily as a baroque violinist who also plays fiddle in the Cape Breton and 18th-century Scottish styles. He grew up in Maryland, near Washington, D.C., learning violin from age four and exploring various fiddling styles early on. David studied baroque violin with Stanley Ritchie at Indiana University in the 1980s and joined Tafelmusik (Toronto) for ten years, 1988-1998. He became a Canadian citizen in the 1990s and has lived in Halifax since 2000. David co-founded several music ensembles, including the Medieval Quintet, Puirt A Baroque, Ferintosh, Tempest Baroque Ensemble, and Vortex 3. He currently performs frequently with Chris Norman, Ensemble Regale, and Red Priest. David is featured on dozens of recordings, including those with Seattle Baroque, Apollo’s Fire, Ensemble Caprice, Les Voix Humaines, La Nef, Toronto Consort, Symphony Nova Scotia, Doug MacPhee, Suzie LeBlanc, and Concerto Caledonia.

A province wide celebration of Nova Scotia’s musical heritage since 1985, Musique Royale brings performances of early, traditional and world music to settings of historic and cultural significance throughout the province.  For its thirtieth anniversary summer season, Musique Royale will bring events to over 20 communities in the province. Events are presented year round on the south shore. These include major choral performances with King’s College Chapel Choir and Cappella Regalis, a series of salon events at Cecilia’s Retreat in Mahone Bay and ‘Cookie Concerts’ at the Lunenburg School of the Arts. Symphony Nova Scotia is also presented by Musique Royale in the beautiful, historic setting at St. John’s Anglican Church in Lunenburg.