Architecture Week 2019 at Lunenburg School of the Arts

In a rapidly urbanized world, what does the future hold for traditional rural societies? As Fogo Island, a small community off the coast of Newfoundland, struggles to sustain its unique way of life in the face of a collapse of its cod fishing industry, architect Todd Saunders and social entrepreneur Zita Cobb’s vision for positive change results in the envisioning, designing and building of strikingly original architecture that will become a catalyst for social change.

Experience this staggeringly beautiful place and how the community and local workers, together with Saunders and Cobb, come together and play a role in this creative process during a time of optimism and uncertain hope. Change is coming to Fogo Island. [Architecture & Design Film Festival]

“Examines how the architecture acknowledges the cultural traditions which inspire it, while maintaining a captivating sense of the unfamiliar. Photographed over the course of four seasons, it offers a portrait of an island and its people which tackles the juxtaposition between old and new and the complexities of building in a place far removed from the relative convenience of mainland Canada.” – Architecture Daily 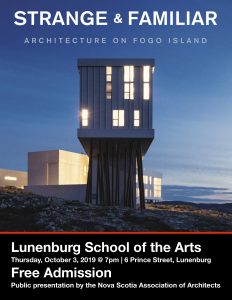