Lunenburg Bound Books, and Viking Canada are thrilled to announce the launch of Shandi Mitchell’s new book, the WAITING HOURS. Please join us at the Lunenburg School of the Arts on Monday May 6, at 7pm for what will be a great evening as Shandi reads from, and speaks about the creation of her book, and if you like, Shandi will be pleased to sign a copy just for you!

When you spend your life saving others…who will be there to save you?
When tragedy erupts on a stifling summer night, three ordinary people, with the extraordinary jobs of rescuing strangers, are connected to one another in ways both explicit and invisible. Each is deeply devoted to what they do, 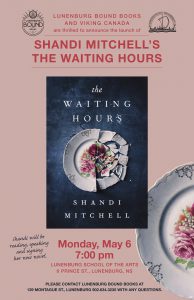 but they are all beginning to crack under the immense pressures of their work.

Tough-as-nails Kate, when she’s not working with her beloved search-and-rescue dog, Zeus, is a trauma nurse who spends her off-duty hours trying to forget what she has seen. Estranged from her troubled family, she must confront the fact that resolution may elude her forever. Respected police officer Mike is on the edge of burnout and sets himself on a downward spiral that may be impossible to break, fraying the bonds of love that hold his family together. Tamara, an agoraphobic 911 dispatcher, who is trying her hardest to remain as calm and emotionless as an automated message, is propelled into the middle of a story that she can’t avoid and must enter the world to find out how it ends.

With a city prickling under a heat wave and a hurricane threatening to make landfall, these responders will be forced to make fateful choices that will alter lives. A storm is coming and nobody is prepared.

SHANDI MITCHELL is an author and filmmaker. Her debut novel, Under This Unbroken Sky, was simultaneously 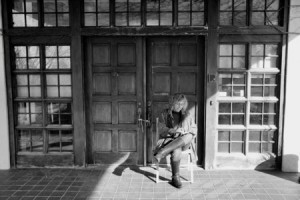 published by Penguin Canada, Weidenfeld & Nicolson (UK), and HarperCollins (US) in August 2009. It sold in nine countries, including translation rights for Chinese, Hebrew, Dutch, and Italian. Under This Unbroken Sky won the 2010 Commonwealth Regional Prize for First Book (Canada/Caribbean), the Thomas Head Raddall Fiction Award, the Margaret and John Savage First Book Award, and the 2012 Kobzar Literary Award. It was also longlisted for the IMPAC Dublin Literary Award. Mitchell was born in New Brunswick, raised in Alberta, and now makes her home in Nova Scotia.

Photo of Shandi by Christopher Porter.