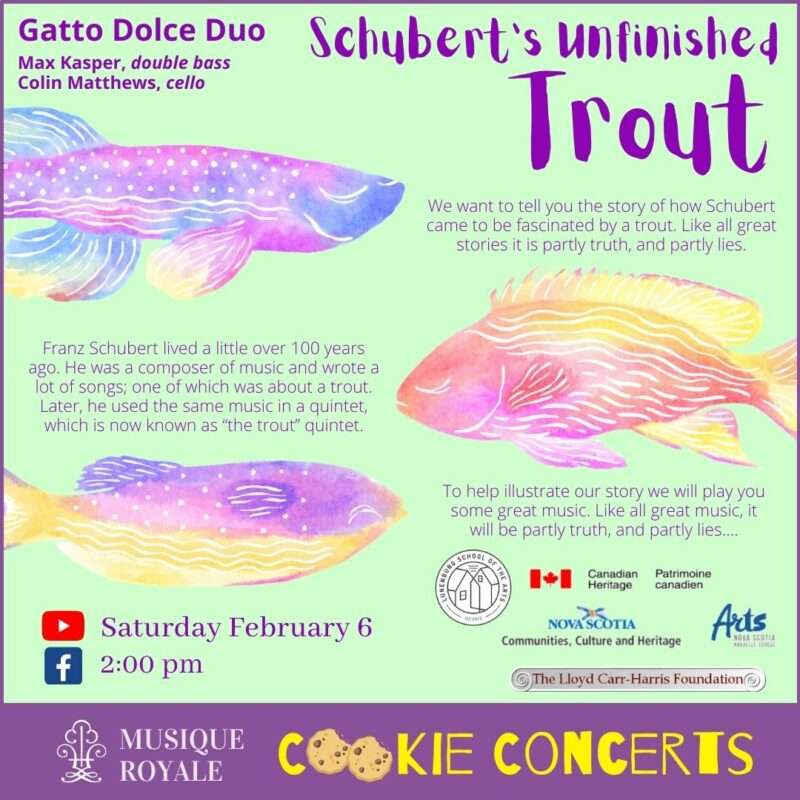 February’s virtual Cookie Concert features Gatto Dolce Duo performing‚ Schubert’s Unfinished Trout. We want to tell you the story of how Schubert came to be fascinated by a trout. Like all great stories, it is partly truth, and partly lies.

Franz Schubert lived a little over 100 years ago. He was a composer of music and wrote a lot of songs; one of which was about a trout. Later, he used the same music in a quintet, which is now known as “the trout” quintet.

To help illustrate our story we will play you some great music. Like all great music, it will be partly truth, and partly lies….

About Gatto Dolce
Performing great chamber music with humorous anecdotes on the life and times of the composers, Colin Matthews and Max Kasper first met over 20 years ago while both were students in the National Youth Orchestra of Canada. After a decade of playing in different parts of the country, Colin and Max found themselves living in Halifax where they started reading duets for fun. These readings evolved into being more serious once both musicians discovered the potential of this combination. Their debut concert was at Bearly‚Äôs House of Blues and Ribs. Since then Max and Colin have played in many places around the province, including the Octagon, the Lillian Piercy Concert Hall and the Music Room. They have also completed a CD, Gatto Dolce Duo, which are Duets for Cello and Bass.

Colin Matthews, cello
After musical studies at Dalhousie and McGill Universities, Colin continued on with a career as both a Chamber Musician and Orchestral cellist. He has played with numerous ensembles including L‚Äôorchestre Symphonique De Laval, the Thunder Bay Symphony, and the Kingston Symphony (acting principal cellist and soloist). He has appeared as a chamber musician and solo cellist at such festivals as The Ottawa Valley Chamber Music Festival, and “New Music in New Places”. He was also invited to be a guest performer for the The Scotia Festival of Music. Colin has been recorded  in film scores, CBC radio broadcasts and two new CD’s produced by “New Music North” and Gatto Dolce respectively. In 2000, after a 15 year absence, Colin returned to Halifax where he is now the head of a vibrant cello studio as well as being the cellist for the Duo “Gatto Dolce and a member of the Basso Nova ensemble.  Mr. Matthews was also the cellist for the critically acclaimed hit stage production “The Satchmo Suite”.

Max Kasper, double bass
Principal Bassist of Symphony Nova Scotia since 1986, Max Kasper has gained quite a following over the past 20 years for the public education concerts/lectures he organizes and hosts at the Halifax Public Library. As well as occasionally hosting Symphony In-School Concerts and narrating ‚ÄúPeter and the Wolf‚Äù too many times to count, he has acted as MC for many events in the community over the years and was one of the hosts for the Symphony‚Äôs ‚ÄúMusically Speaking‚Äù concerts. Of course his first passion is the double bass, which he began playing in the Toronto public school system at the age of ten. The rest just seemed to fall into place.

Max has appeared as a soloist with the orchestra on several occasions, and given many solo bass recitals over the years. He also loves playing chamber music, and has formed the Gatto Dolce Duo with cellist Colin Matthews. They released their first CD, Duets for Cello and Bass, in the spring of 2008, and are slowly working on the next one. Max has a keen interest in period music; he plays in Halifax with R√©jouissance and Tempest baroque ensembles, and plays as an extra with Tafelmusik on occasion.

Now pursuing a second career as a bow maker, Max has the unique distinction of playing on a bass and bows he has made himself. He lives in Halifax with his love, Esther Ricketts, and their three cats: Xena, Murray, and Finnegan. In his spare time he likes to watch TV, read, sleep, and feed the cats.