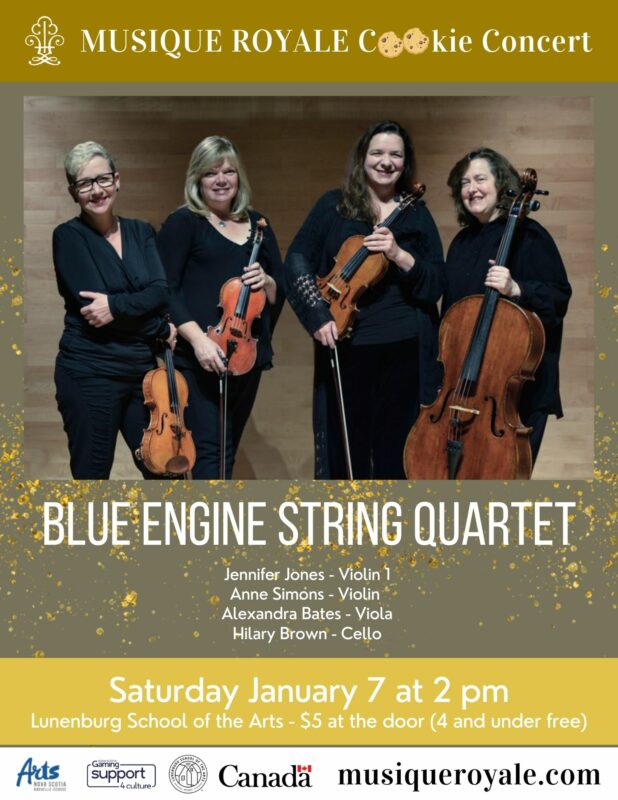 Musique Royale rings in the new year with the fabulous Blue Engine String Quartet who are the featured performers for our upcoming Cookie Concert! Formed in 1997, Blue Engine String Quartet has been a fixture on the maritime classical music scene ever since. Named after “The Little Blue Engine That Could”, the quartet, like its namesake, is always looking to climb that hill and deliver the goods. Over the years, Blue Engine has been artist-in-residence at the Maritime Conservatory of Performing Arts, Acadia University, Cecilia Concerts in Halifax, and is heard frequently on national CBC Radio and cbc.ca. Join us to hear the inimitable, and action-packed music of Blue Engine String Quartet, followed by some sweet treats. The concert takes place Saturday, January 7th at 2:00pm in the Ramp Studio at 6 Prince Street. All ages are invited. $5 at the door (4 and under free).

The Blue Engine String Quartet was formed in 1997 as the core ensemble of the Nova Scotia chamber music series, Blue Engine Music. Blue Engine has been artist-in-residence at the Maritime Conservatory of Performing Arts, Acadia University, Cecilia Concerts in Halifax, and is heard frequently on national CBC Radio and CBC.CA. Blue Engine won gold in The Coast magazine’s 2015 “Best of Halifax” reader’s poll. Named after “The Little Blue Engine That Could”, the quartet, like its namesake, is always looking to climb that hill and deliver the goods. Their “station house” is built upon a foundation of European masterworks: bricks, beams and mortar by Beethoven, Brahms, Schubert, Shostakovich, Ravel, Mendelssohn, and Dvorak. Living artists forge the steel for their rail line. In the last two decades, Blue Engine has traversed some challenging heights thanks to their close association with contemporary Canadian composers such as Derek Charke, Christos Hatzis, John Plant, Brian Current, Emily Doolittle, Peter-Anthony Togni, Tony Genge, Jeff Reilly and Alasdair MacLean. The Blue Engine String Quartet is especially proud to perform works of female composers such as Fanny Mendelssohn, Amy Beach, Lucie Vellère, Rebecca Clarke and Jennifer Higdon. Always looking for music that matters, the quartet strives to perform works that have greater social context – for example, performing compositions that were repressed by the Nazis or hidden away during the Holocaust. 2009 saw the first performance of Scott Macmillan’s “We Are Africville”. The 2012 Scotia Festival of Music was the scene for another premiere, this one a concert opera composed by John Plant and Andrew Wainwright – a memorial to Robert Dziekanski called, “I Will Fly Like a Bird”. Blue Engine is frequently featured as guest artists on the recordings and videos of some of our finest singer-songwriters: Mary Jane Lamond, Jenn Grant, Meaghan Smith, Jill Barber, Catherine MacLellan, Reeny Smith, and Erin Costelo. A Christmas tour featuring actor/writer/director Shelley Thompson reading her evocative short stories coincided with the release of Blue Engine’s Christmas CD in 2009. In 2003 the quartet was featured in ‘Quartet Plus Four at Christmas’, a Christmas Special for Vision TV and CBC. The quartet was delighted to accompany Michael Bublé in his breakout performance at the 2006 Juno Awards Gala broadcast. In 2011 the quartet gave a private performance of Philip Glass’s Fourth String Quartet with the composer himself in attendance. In the late 1990s, Blue Engine was approached by the BBC to play some music for a documentary film on the life of comic genius Dudley Moore. The experience of playing for an ailing Mr. Moore was a deeply emotional one. The quartet was asked to play one of his compositions written during his musical studies at Oxford University. It had been more than forty years since he had last heard his only string quartet. In 2005 Blue Engine released its first commercial recording, “If It Be Your Will – Songs of Leonard Cohen”. This collection of fifteen essential songs was arranged by Chris Palmer, featuring the insightful interpretations of singer Cliff Le Jeune and the piano accompaniment of Paul Simons. The CD received many rave reviews. The quartet was honoured by Canadian soprano Suzie LeBlanc when she asked them in 2011 to be the core ensemble in her Elizabeth Bishop Legacy Project, “I Am In Need Of Music”. This important recording is a multi-faceted collection of song settings of Bishop’s verse featuring the work of composers John Plant, Christos Hatzis, Alasdair MacLean and Emily Doolittle. The recording, a finalist for the Nova Scotia Masterworks Award, received the 2013 ECMA Classical Recording of the Year award. Blue Engine was thrilled to share the stage with Suzie for the quartet’s Toronto debut in December 2016.

Over the past few years the quartet has continued its journey with performances throughout the Maritimes, such as being featured on the Acadia Performing Arts Series in Wolfville and Music UNB in Fredericton, a concert in Inverness, Cape Breton, with Scott MacMillan, as well as here in Halifax at the Music Room.