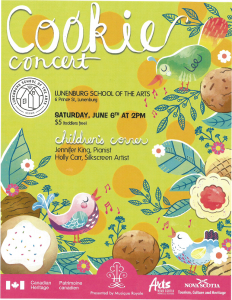 This wonderful combination of art and music is sure to be an inspiring and enjoyable afternoon experience for all ages.

Holly will be painting live on silk while Jennifer is performing on the piano. Many of the characters found in the music-a little shepherd, dancing dolls, sleeping elephants, Tom Thumb, enchanted fairy gardens, Sleeping Beauty and Beauty and the Beast will be represented by Holly’s expressive and colorful painting.

The beautiful French Impressionistic music of Claude Debussy and Maurice Ravel was written for children in their lives. The Children’s Corner was written for Debussy’s little girl, Chouchou while Ravel wrote his Mother Goose Suite originally as a duet for two daughters of close friends he knew in Paris. Also included will be selections from a solo piano version of Georges Bizet’s Children’s Games. This special collaboration of these two artists is designed to fire the imagination of all.

The event will take place at the Lunenburg School of the Arts, 6 Prince Street (corner Montague and Prince), on Saturday June 6th at 2 pm. Admission to the performance is $5 at the door (free for toddlers). Admission also includes a time to socialize with artists and friends as you enjoy the unique atmosphere in one of Lunenburg’s newest artistic spaces… and a freshly baked cookie! Advance reservations can also be made by calling the Musique Royale Box Office at 902-634-9994.

About the musicians:
Holly Carr has gained national acclaim for her unique style of silk painting. She has participated in numerous group and solo shows and has designed for theatre productions and public instillations.  In recent years Holly has branched out in to performance art, where she paints large works live on stage. Working with numerous musicians and performers including a cross Canada tour with Stuart McLean and the Vinyl Café, as well as performances with world renowned violinist Min Lee in Singapore and the National Art Center Orchestra in Ottawa.  Holly recently had successful performances with the Winnipeg Symphony Orchestra and her own show with Symphony Nova Scotia in February 2010.  Holly graduated from Nova Scotia College of Art and Design with a BFA and BA.Ed , along with her 20 plus years owning and running her multifaceted career she has developed a solid base from which to conduct  her creativity workshops and speaking engagements. During Holly’s sessions she uses art games that she has created along with her live painting performance to facilitate a fun learning experience.

Energetic and insightful, Jennifer King is a versatile pianist who is equally at home on the concert stage, and in the classroom. Also in high demand as an adjudicator, coach, and clinician, she has firmly established herself as a sought-after talent across Atlantic Canada.

A faculty pianist at Acadia University’s School of Music since 2003, Ms. King has performed in hundreds of recitals and concerts at the respected institution as a collaborative pianist, and as a solo artist. Outside the walls of academia, Jennifer has been heard in concert alongside some of Canada’s leading singers such as Measha Bruggergosman, Richard Margison, Isabel Bayrakdarian, and Mary Lou Fallis. She can also be heard on CBC Radio, and seen on a variety of television programs, including the hit Bathroom Divas on Bravo.

Jennifer is a strong believer in community, and in reaching out to the next generation of artists, and educators. She was the founder, and an executive council member of the Prince Edward Island Registered Music Teachers’ Association, and she is currently the Vice-President and Registrar of the Nova Scotia Registered Music Teachers’ Association. Other volunteer activities include sitting on concert committees, fundraising teams, and creating performance and education opportunities for emerging artists.

Ms. King holds a Masters of Music degree in solo piano performance from McGill University, and has completed postgraduate diplomas at the University of Reading in the UK as well as the prestigious Royal Academy of Music in London England. Other highlights from her musical background and education include a scholarship to the Kneisal Hall Chamber Music School, and a grant for contemporary music studies from the Britten Pears School for Advanced Musical Studies.

Her accolades include two scholarships from the Nova Scotia Talent Trust, various Alumni awards and a full entrance scholarship to Acadia University, and an Award of Appreciation from the Lieutenant Governor of Nova Scotia in recognition of her contributions to musical life in the province.

Outside of her multi-faceted career, Jennifer enjoys activities such as cycling, skiing, and boogie boarding. She also loves spending quality time with her husband, a veterinarian, and their two children, Maddie and Evan.